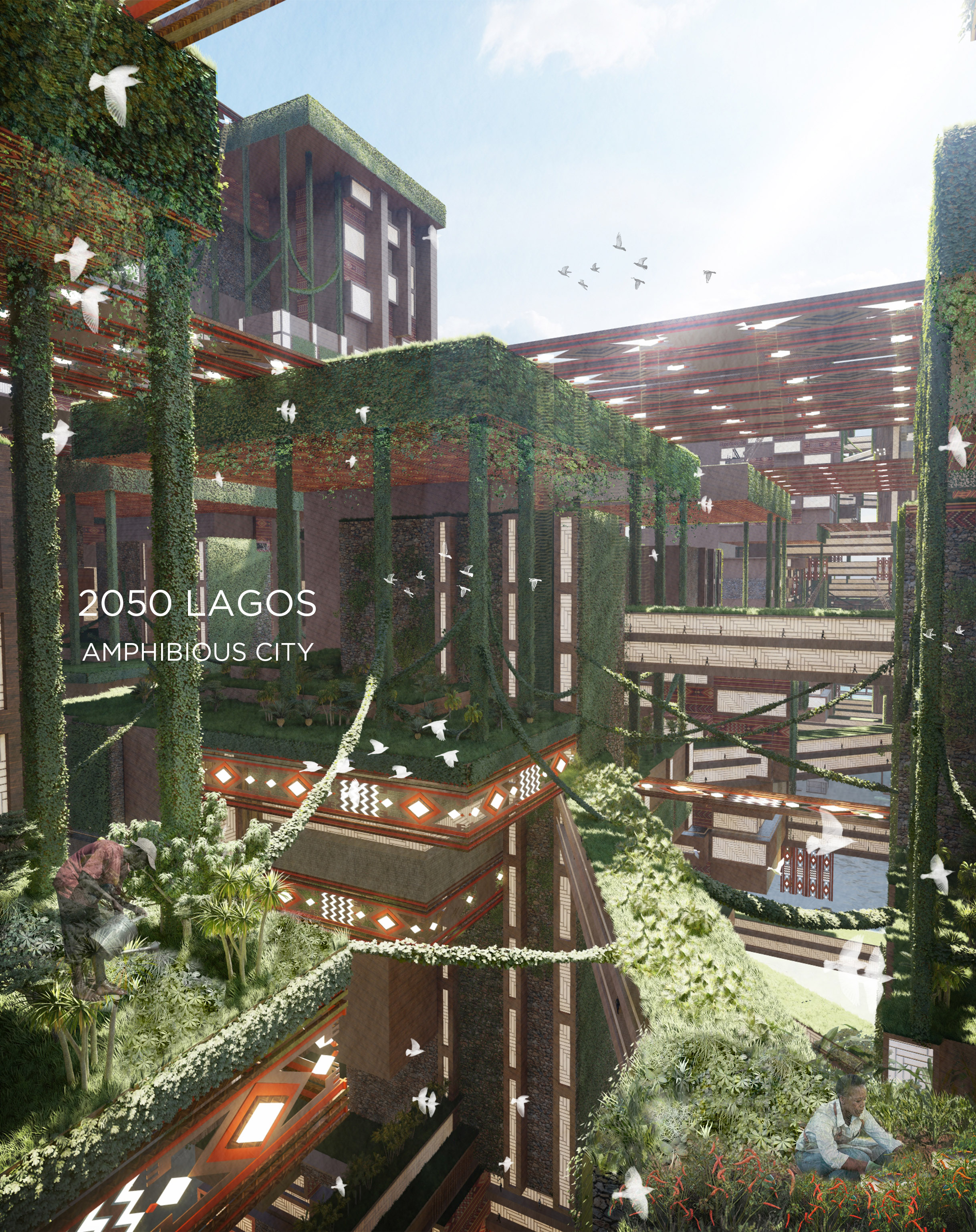 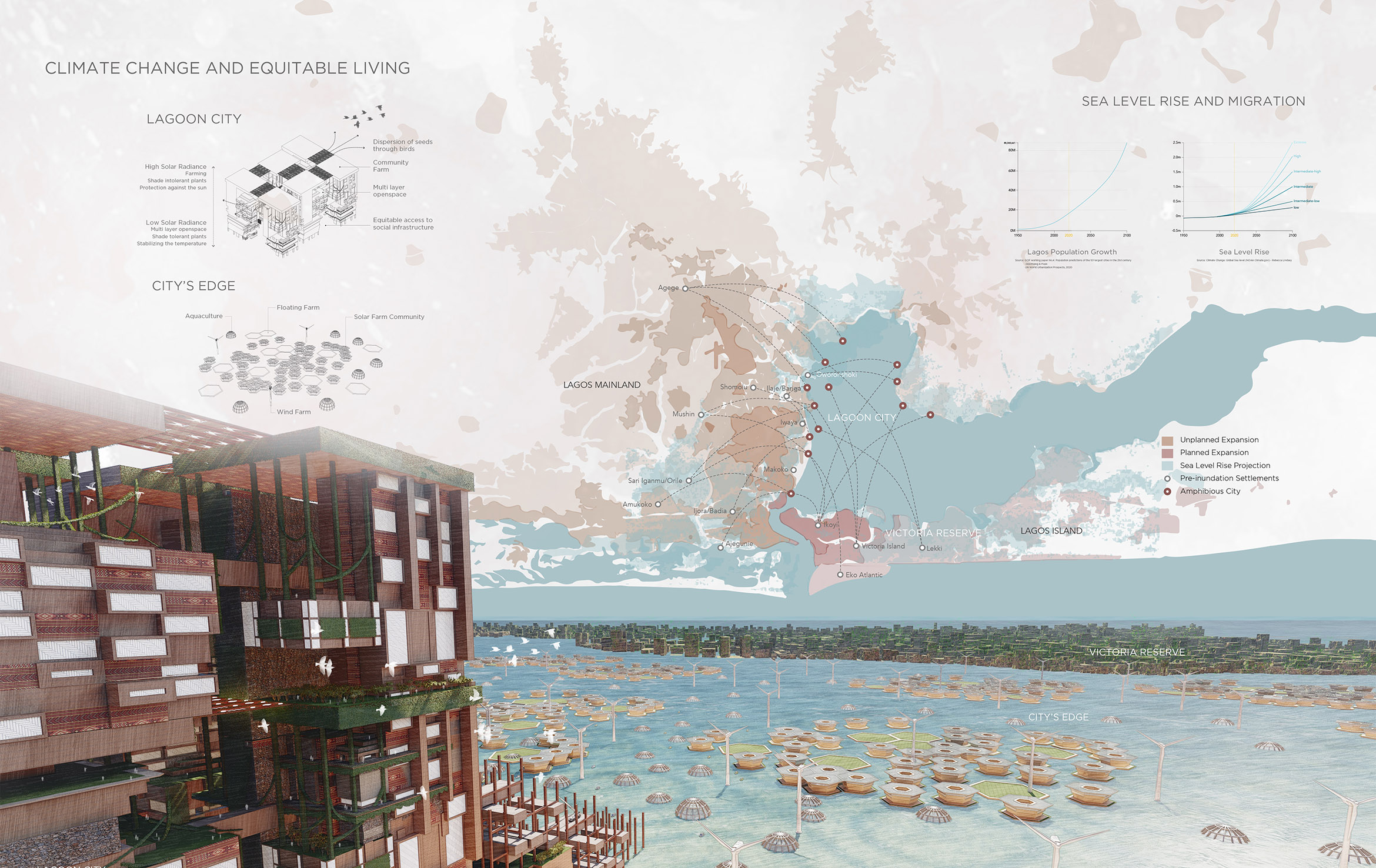 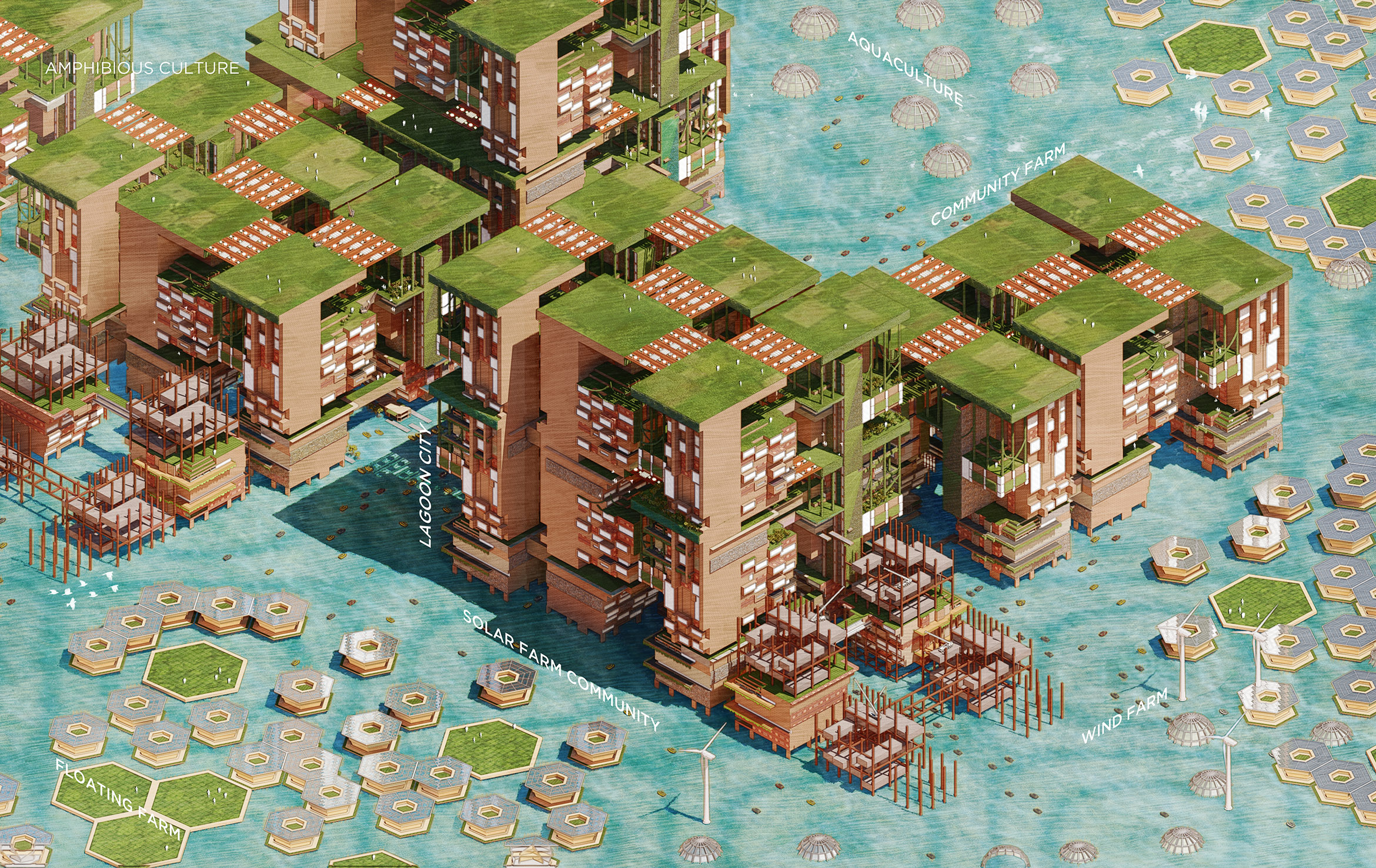 By 2032, severe inundation and storm surges resulting from climate change have forced populations living on Victoria Island to relocate to the land-side of Lagos Lagoon. This relocation leads to extreme population concentration in the Lagoon, posing challenges to the existing infrastructure and housing facilities. “2050 Lagos: Amphibious City” envisions a new Lagoon City along the interior coastline that ensures equitable housing and food security for both displaced and existing populations under climate change and the pandemic.

In the new Lagoon City, vertical housing complexes are built on the water to accommodate a large population. Climate change has forecasted the region to be hotter and dryer, and along with unpredictable storms and floods, living on coastal lands is less sustainable and safe. The vertical housing complexes on the water allow cooling and resilience in sea level rise and flooding events. Housing units offset with each other vertically to maximize equal access to multi-layered social infrastructure. Urban farms are built on the roof where residents plant fruits and vegetables. Due to the pandemic, transportation restrictions have made food sources unreliable. These rooftop farms allow residents to have equal access to food, ensuring food security.

The housing complexes are also designed for birds and seed dispersals. The verticality and offset of units lead to different solar radiance levels, allowing diverse plant species to take roots. The complexes serve as seed banks, attracting birds and encouraging seed dispersals. As climate change has exacerbated the extinction of species, the greens in the Lagoon City play a crucial role in maintaining the genetic diversity of birds and plants.

Victoria Island, the former business hub of Lagos, transforms into Victoria Reserve, an environmental reserve established by the Lagos government. After the retreat, the buildings on the island are repurposed as biodiversity hubs for rewilding. While neoliberal urbanization has decimated the mangroves along the Atlantic coast of Lagos, the new Victoria Reserve reestablishes the mangroves and their associated habitats. With dense vegetation, the island protects the Lagoon City from storm surge.

With the Victoria Reserve serving as a protection, the Lagoon City residents can safely develop amphibious communities with food security and equitable housing. The Victoria Reserve and Lagoon City co-evolve to create an entirely new form of mega-city urbanism, capable of protecting Lagos from worsening challenges while simultaneously expanding the city’s ecological performance.